Coyotes have their litters in April and May. The young are generally on their own when they reach 9 months of age. Coyotes are opportunistic feeders, they will eat dog and cat food, garbage, carrion, fruits, frogs, insects, snakes, and just about anything else they can catch and eat.

Coyotes are generally most active around dawn and dusk, but may be seen during the night or during the day. They live in dens, but generally don’t make their homes near humans. If a den is discovered near a household dirty, sweaty socks, or rags soaked in ammonia may be used to entice them to leave.

Coyotes usually don't travel in packs, but occasionally they may form a pack of up to 6 or 7 animals. More often, coyotes are seen alone or in pairs. One reason coyotes may make their habitat near humans is the easy availability of food. Dog food and cat food left out on porches will attract coyotes as well as bird feeders. Coyotes will eat the bird seed and the birds and rodents that frequent the feeders. If you spot a coyote in your yard you should make a lot of noise and drive the coyote away, continued frequenting of yards without negative responses will result in the coyote becoming accustomed to humans being around.

More information can be found on the following websites:
DFW Wildlife Coyotes
Mammals of Texas
Texas Parks and Wildlife 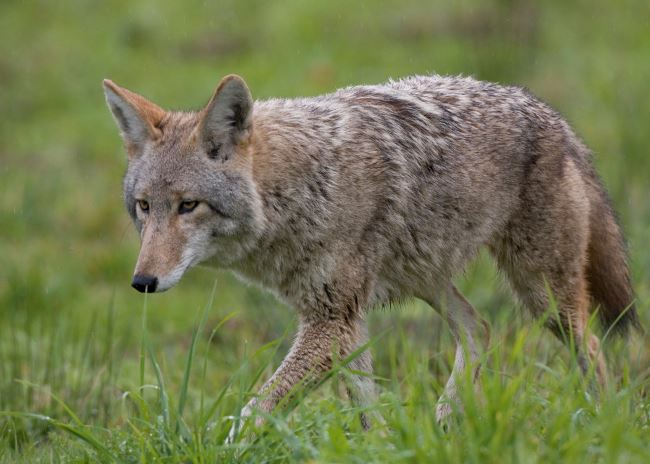