History of the Parker Fire Department 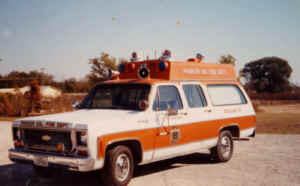 The idea of a Parker Fire Department was conceived in 1982.

During that year, the City of Plano informed the City of Parker that they would shift from a "cost per call" based system to an annual fixed fee system.

Parker citizen, Lou Matteson, rose to the challenge and volunteered his assistance in establishing an alternative to Plano's fire protection.

After a town hall meeting in January 1982, the City Council voted to fund the establishment of the City of Parker Volunteer Fire Department. At the beginning of the following year, thirty-three people volunteered to become firemen.

During the spring of 1983 the volunteers built a fire station and bought a fire engine and necessary equipment. Each fireman trained extensively. The Parker Volunteer Fire Department began answering calls in May 1983.
Since 1983 the Parker Fire Department has added a four bay 3,600 square foot firehouse. Under the leadership of Fire Chief Larry McMenamy, a second fire engine was added in 2003 along with a new brush truck in 2004. Our Fire Department maintains up to date equipment including, Self Contained Breathing Apparatus, quality bunker gear, rescue tools (Jaws of Life), defibrillators and two thermal imaging cameras. In July, 2005 the Fire Department completed the construction of an additional 500 sq. feet to expand our training room and enclosed storage capacity. It is worthy of note that much of our fire equipment and supplies are purchased with donated funds from citizens within the community and from our annual Fire Department fund raiser. 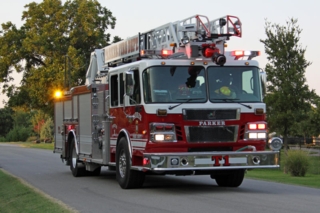 September 2005 marked the end of an era with the retirement of Chief McMenamy. After 23 years of service, Chief McMenamy will be missed as he was a foundation of the original Parker Volunteer Fire Department. Assistant Chief, Mike Sheff (also a founding member), took the position of Chief.

Working closely with our Medical Control Director, we have become authorized by the State of Texas as an Advanced Life Support provider, meaning that we now provide paramedic-level prehospital care to our citizens.